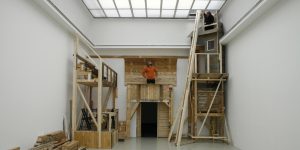 … they became strangely small, and crouched at one end of the space, a bit paranoid.

Shut Down-Night Shift expands on the work Shut Down. For this installation, materials from the original project were re-configured and augmented in the Kunstverein’s gallery. Some structures were re-built precisely from the originals, and others were made of components from the previous work and salvaged wood sourced on location in Hannover. The project was commenced just before the show’s opening, and continued throughout the exhibition period, finishing on the final day. The work on the project was conducted in the evenings and nights in the deserted gallery, presenting the visitors and staff of the Kunstverein with a construction that changed daily.

The structures themselves had seemed overwhelming in their previous installation, in which they had completely dominated the space. In the Kunstverein gallery they became strangely small, and crouched at one end of the space, a bit paranoid. During the duration of the show, a tower was constructed, loosely modeled on Tatlin’s Monumnet to the Third International, the tower was comprised of three stages. The first stage being the former watch tower from the original construction, here cut down and placed in a lower position. The second stage was composed of the shed, formerly the entrance to the Shut Down project, it now became the entrance to the final component of the tower. Finally, if the visitor to the space was willing to make the climb, a ladder would allow access through the ceiling of the gallery to the hidden space between the drop ceiling and the true roof beyond. This presented a kind of escape route from the structures below, and the exhibition hall itself.