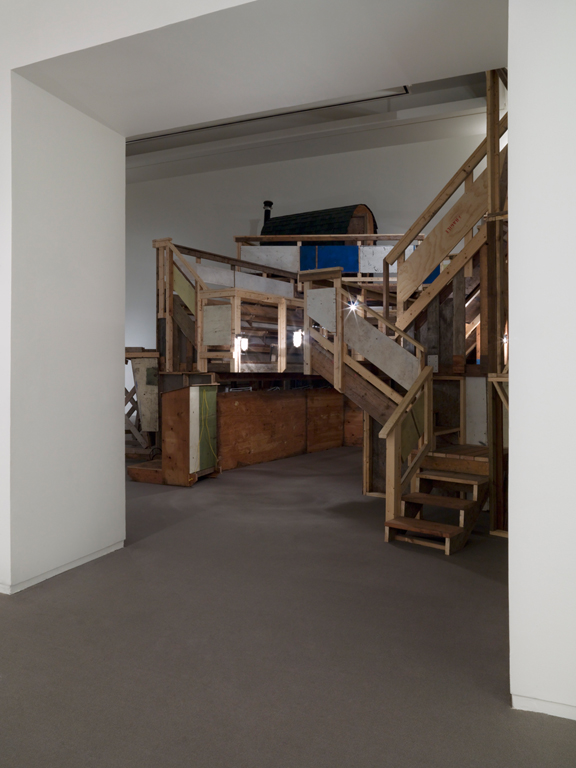 for fools and traitors nothing

The ridiculousness of the name Office of Special Plans became a central organizing theme to the entire installation, combining a child-like character with a serious investigation of power relations implicit in constructed spaces.

The Office of Special Plans was realized over a period of three months of construction on Bowen Island, BC. Materials range from old construction lumber, concrete form wood, building demolition waste and other found materials. The installation consists of a number of distinct architectural elements built upon each other and centered around an elevated amphitheater/operating theater.

The installation takes its name from a shadow intelligence gathering organization established by the Bush regime in the USA. This organization existed for a short period of time, less than a year, in which time it did an end-run around the CIA and cherry-picked information to justify the attack on Iraq in 2003. The ridiculousness of the name Office of Special Plans became a central organizing theme to the entire installation, combining a child-like character with a serious investigation of power relations implicit in constructed spaces.

The installation had three entry points, one through a door watched over by a vacated guard kiosk, a second opening onto the operating theatre and a third from the floor above where visitors could access an elevated viewing platform that provided a lookout over the entire installation.

The Installation also included a small shack raised to a platform four meters off the gallery floor. This shack was known as the Depression Shack (more for the fact that it could be constructed on a shoestring budget and less because it was depressing in its nature). This small structure had been our site office during the construction phase of the Office of Special Plans and was included in the installation as a kind of refuge site, a place where visitors could enter and close themselves in.

The amphitheater provided the main architectural element of the installation and became a place where people would sit and watch others coming through the exhibition. The design of the space funneled visitors through the underbelly of the structure and through a kind of walkway that exposed them to the spectatorship of the others sitting on the bleachers. Under these seats there were hidden on one side a number of working cubicles, and on the other a kind of living area with a table and chairs and four bunk beds.